Is Your Partner Really Having an Orgasm During Sex?

In my best-case scenario, all couples would engage in some sort of premarital counseling. I find this to be a tremendous tool to help couples discern the important stuff when they are knee-deep in the infatuated kind of love or preparing for a wedding day celebration. In addition to reducing the incidence of divorce between 30 and 50 percent, premarital counseling gives couples the opportunity to identify strengths, limitations, and areas for growth. By viewing potentially significant issues through a different lens, couples can dialogue about areas like children, money, and sex, each of which has been shown to be an area for future concern. In doing so, couples get a head start on establishing the skills for effective compromise and communication in each domain. 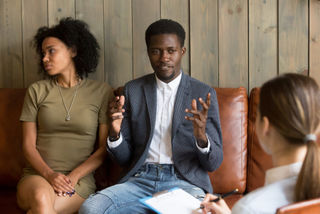 Unfortunately, my clients Joan and John didn’t participate in premarital counseling. Much like most couples today, nothing gave them a reason to discuss how to address raising children, dealing with finances, and certainly not talking about sex. For years, Joan hoped their sex life would improve. She hoped John would realize there was more to sex than meeting his own needs, but he never figured it out. She withdrew in a way that protected her from the unfulfilled sexual encounters that caused her a loss of self-esteem. She felt damaged.

John was raised in a home where you spoke up to have your needs met. John took responsibility for his sexual enjoyment yet never considered how his singular focus impacted his wife. John never talked to Joan about her satisfaction because he wrongly assumed her orgasms were plentiful. John is not alone.  In a 2018 study in the Journal of Sexual Medicine1, 43% of husbands failed to recognize how little their wives were actually experiencing orgasms. While 87% of the husbands reported achieving consistent orgasms themselves, only 49% of the wives reported experiencing the same. Less than half. The study goes on to reveal that a husband’s sexual satisfaction is positively associated with his perception of how often he thinks his wife is having an orgasm, yet this report tells us he is significantly overestimating her sexual satisfaction.

Was John experiencing blissful ignorance or was he choosing not to address the elephant in the room? Did he know Joan’s satisfaction was waning? In the study, the husband’s perceptions drove his satisfaction, while the wives reported their satisfaction to be positively associated with sexual communication between partners. Yet their partners seem unaware of the frequency of their orgasms. If both partners value sexual communication, why didn’t John know this? Why are men missing the mark? And more so, why wasn’t Joan speaking up to meet her needs? Rather than live with unfulfilling sex, why not just talk about it about it?

If women have been saddled with one Hollywood stereotype, there is no doubt it is the role of orgasm faker extraordinaire. Throughout time, Oscar-worthy performances of women faking orgasms can be found gracing the big screen. While much of this is fiction, orgasm faking is not. According to recent research about 59% of women reported to have faked orgasms2. But if our sex lives are as amazing as they appear in motion pictures, why are women still faking orgasms? Women fake orgasms for a variety of reasons, some of which include not wanting to hurt a partner’s feelings, to bruise their ego, or in some situations, to just get it over with.

Joan admitted to faking orgasms for all those reasons and more. In the beginning of the relationship, she wanted John to love her so much that she was willing to forgo her sexual satisfaction to bolster his ego. She knew he was trying diligently to be the lover she wanted. She also knew he was missing the mark. She wanted to talk to him but found herself fearful of having an honest conversation about her sexual needs.

During that time, she started to become jaded that John never asked her what she thought of sex. Instead, he told her how great it was and she just smiled. She allowed this to go on because her fear of rejection overrode her need to be sexually satisfied. Later on, she faked orgasms just to speed the process along. She knew John was looking for the signs that she was being pleasured. She did her best to meet his needs. While she did not do this with malice, her actions were not honest and served to harm the state of their relationship.

The problem with faking orgasms, as outlined in the earlier report, is that men are overestimating the frequency of their wives’ orgasms but are likely doing so because they aren’t really able to discern between truth and fiction. By faking orgasms, women are setting their partner up for failure which in turn exacerbates the problem. The partner does more of what they think their wife wants. In essence, Joan conditioned John to believe his efforts were being met with intense pleasure and more frequent orgasms than there really were.

As time went on, Joan and John drifted apart. They became less like lovers and more like ships passing in the night. As their lives went in different directions, Joan felt more like a burden to the marriage instead of an asset. She felt alone and lonely, in a family so large that she was swallowed up by meeting the needs of everyone else. She gave up.

John, on the other hand, fought back. He pressed Joan more often for sex. He didn’t feel as if his efforts to provide for the family were appreciated. He longed for the Joan who worshiped the ground he walked on. The one who made their relationship complete. He was certain Joan was having an affair. He went to great lengths to catch her in the act, but he never did. At some point, he just gave up. When he did, he asked for a divorce because his marriage was over.

Establishing open lines of communication driven by judgment-free policies can assist in facilitating conversations as they arise.  By establishing these ground rules, you can develop the tools you need long term. But what happens if you live in a society that values social media communication over all else? Where many are unequipped to engage in traditional conversation, of any kind?

Since communication is the currency of all relationships, we need to work more diligently to both provide and model the tools necessary for communication, throughout the lifespan.  By giving your partner permission to speak openly and honestly about sex, without judgment, we create a space that is safe enough to ask difficult questions and provide difficult answers.

We have a long way to go to break the taboo of sex, but it is never too late to start.  If you are one of those people who speaks openly and honestly with your partner, kudos to you.  The world needs more of you. For everyone else, talking is the place to start.